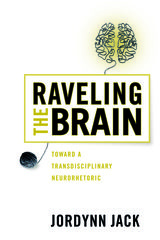 Humans have always been fascinated by the workings of the mind and now, more than ever, neuroscience has become a popular area of inquiry. While neuroscience advertises itself as an interdisciplinary field, drawing on biology, physics, engineering, and psychology, to date it has engaged less often with the humanities. In this transdisciplinary work, Jordynn Jack aims to show how the humanities—and in particular, rhetoric—have much to add to the neurosciences, offering rich insights into the ways in which the brain is enmeshed in the body, in culture, and in discourse.
Jack first looks at the problem of “neurohype”—exaggerated or oversimplified claims that essentialize brains and make them “uncritically real”—questioning some of the fundamental assumptions about the brain that experimental protocols and psychological concepts rely on. Then, through examples of research on sex and gender, political orientation, and affect, Jack demonstrates how a rhetorical-material approach can help to generate alternative approaches to studying the brain that might mitigate the problem of neurohype. By raveling out the roots of neurohype and raveling back its use through time, Raveling the Brain shows how rhetoric and neuroscience might be raveled together, or intertwined, to create a stronger transdisciplinary approach that might enrich our understanding of those issues of interest to neuroscientists and humanists alike.
AUTHOR BIOGRAPHY
Jordynn Jack is Professor at the University of North Carolina at Chapel Hill. She is the author, most recently, of Autism and Gender: From Refrigerator Mothers to Computer Geeks.
TABLE OF CONTENTS