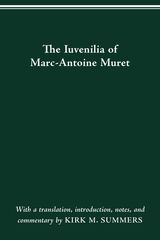 Marc-Antoine Muret (1526–1585) was a major figure in humanist classical scholarship. A superb Latinist, he influenced, among others, the Dutch humanist Justus Lipsius. This is the first English translation, with introduction, notes, and commentary, of Muret’s Latin iuvenilia. The juvenilia cover a wide variety of literary genres: odes, satires, epigrams, elegies, and epistles. Modeled on the classical poets Horace, Catullus, and Martial, these poems also reveal an acquaintance with the works of Muret’s contempories Joachim Du Bellay and Jean Dorat.

A growing interest in the contributions and perspectives of Renaissance authors who wrote in Latin has created an urgent need for accessible modern editions of their works. There is no hope of truly understanding the Renaissance, which, after all, was a revival of ancient learning integrated with an emerging modern world view, without taking into account the large body of work produced by neo-Latin authors. The Iuvenilia of Marc-Antoine Muret helps fill the need for critical editions that provide a general context and interpretation. A major neo-Latin poet, Muret was thoroughly versed in classical literature, mythology, rhetoric, and philosophy. He had inherited centuries of medieval learning and practices, both secular and religious. Muret incorporated the generic innovations of contemporary humanists while referring to current events and figures. In short, he summed up in his own person the body of human endeavor and thinking as it stood in his own time.

Given Muret’s importance, this lively translation by Kirk M. Summers, with an introduction, notes, and commentary, will appeal to classicists, including those interested in the classical tradition, as well as to scholars working on the French and European Renaissance.
AUTHOR BIOGRAPHY
Kirk M. Summers is associate professor of classics at the University of Alabama in Tuscaloosa.
REVIEWS
“The translation into English is the first ever, and the translation is excellent. The style of the introductory matter is clear and concise. I'm especially impressed at the commentary. Those who use this book will find what they need, quickly and efficiently.” —Craig Kallendorf, Texas A&M University