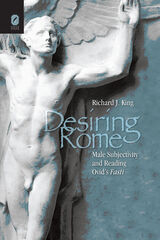 During his last two decades (ca. 2 BCE–17 CE), Ovid composed, but never completed, his Fasti, an elegiac representation of Rome’s rites and festivals: only six of twelve month-books remain. Earlier scholars have claimed that this is due either to Ovid’s exile from Rome (which put him out of touch with the Roman literary world) or else his frustration over the Roman calendar’s discontinuity. Drawing upon recent scholarship in gender studies and Lacanian film theory, Richard J. King analyzes this exilic incompletion as inviting the citizen male reader into what he calls an “angular” or “skewed” viewpoint, which interrogates the Roman hierarchical and male-dominated social order, insofar as it is mirrored in the Roman calendar of rites and festivals.  Ovid (already well known and even infamous as the composer of erotic poems and the Metamorphoses) does this by emulating the civic gesture of “calendar presentation,” whereby upwardly mobile adult male citizens caused calendars to be carved in stone and set up in conspicuous public places to reflect the city’s pride and to build their own prestige as public figures. In this innovative study, King discusses the Fasti as Ovid’s socially strategic use of this gesture. Interrupted by exile and filled with varying explanations of Roman festivals, Ovid’s poetic version manifests a form whose brokenness comments on the fractured identity of the exiled poet and citizen subjects generally in an imperial order ambivalent toward its greatest poet.
Desiring Rome expands upon recent recognition of the Fasti’s centrality to early imperial politics by situating the poem’s “failure” within broader negotiations of identity between early imperial citizen-subjects and the cultural ideology of Roman manhood.
AUTHOR BIOGRAPHY
Richard J. King is assistant professor of classics in the Department of Modern Languages and Classics at Ball State University in Muncie, Indiana.
REVIEWS
“King draws a clear and cogent thread of argument through a consistent, coordinated methodology drawn from psychoanalysis and film theory. As King persuasively illustrates, the calendar is a seen object that also shapes the viewer, making its very perception a matter of negotiation, insofar as the calendar brokers a relationship between the citizen-subject and his cultural symbolization system.” —Micaela Janan, Duke University