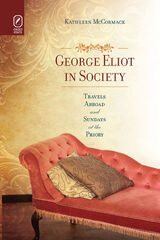 Sundays at the Priory, the salons that George Eliot and George Henry Lewes conducted throughout the winter seasons during their later years in the 1870s, have generally earned descriptions as at once scandalous and dull, with few women in attendance, and guests approaching the Sibyl one by one to express their almost pious devotion. But both the guest lists of the salons—which include significant numbers of women, a substantial gay and lesbian contingent, and a group of singers who performed repeatedly—together with the couple’s frequent travels to European spas, where they encountered many of the guests likely to visit the Priory, revise the conclusion that George Eliot lived her entire life as an ostracized recluse. Instead, newly mined sources reveal George Eliot as a member of a large and elite, if slightly Bohemian, international social circle in which she moved as a literary celebrity and through which she stimulated her creative imagination as she composed her later poetry and fiction.

George Eliot in Society: Travels Abroad and Sundays at the Priory by Kathleen McCormack draws attention to the survival of the literary/musical/artistic salon in the Victorian era, at a time in which social interactions coexisted with rising tensions that would soon obliterate the European spa/salon culture in which the Leweses participated, both as they traveled abroad and at Sundays at the Priory.
AUTHOR BIOGRAPHY
Kathleen McCormack is professor of English at Florida International University.
TABLE OF CONTENTS
Contents
List of Illustrations
Acknowledgments
Abbreviations
Chapter 1: Introduction: The Big “S”
Chapter 2: Travels Abroad: Taking the Waters
Chapter 3: Months of Sundays
Chapter 4: Between Middlemarch and Daniel Deronda: Singers, Lovers, and Others
Chapter 5: The Salons, the Spas, and Daniel Deronda
Chapter 6: John Cross and the Last Spa
Appendix: The Leweses’ Travels Abroad: A Chronology
Bibliography
Index