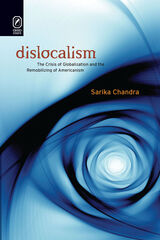 Notwithstanding its now extensive, trans-disciplinary bibliography, the full reality of globalization remains less well understood than commonly thought. As an objective, secular phenomenon, globalization has continued to be obscured by ideological and rhetorical strategies that travel under the same name but posit it as simply the abstract-universal other of the local. Dislocalism: The Crisis of Globalization and the Remobilizing of Americanism makes such strategies and the global/local binary they reinforce into objects of critical analysis.

Taking her title from a new theoretical concept at the heart of this critique, Sarika Chandra argues that the historically dominant position of the United States in the global order takes on a uniquely urgent and problematic form: globalization is experienced not only as external to the American “nation of nations” but also as something internal to it. Through close study of four discrete intellectual/cultural arenas from the 1980s to the present—management theory, the literature of immigration, travel writing, and narratives of the culinary exotic—Chandra further argues that an Americanized imperative to globalize results in a repositioning of the local to maintain national and institutional boundaries. To “dislocalize” becomes, simultaneously, to “dislocalize.”

By mapping out the deeper, often hidden discursive ambiguities and historical specificities of an Americanized globalization, Dislocalism effectively redefines and re-orients the fields of American literary and cultural studies.

AUTHOR BIOGRAPHY
Sarika Chandra is associate professor of English and director of American studies at Wayne State University.
REVIEWS
“Dislocalism is an essential addition to scholarship on the current state of multicultural education, the university–private sector nexus, and the resurgence of U.S. economic and cultural nationalism in the age of neoliberalism. This broad-thinking and highly original book will be of great value to scholars in globalization studies, American studies, and cultural studies.” —Bill V. Mullen, professor of English and American Studies, Purdue University

“Sarika Chandra’s keystone concept of ‘dislocalism’ is a breathtakingly bold encapsulation of an extraordinarily complex process. Dislocalism will be a topic of great conversation and debate, and it will establish Chandra’s reputation as an imaginative, ambitious thinker.” —Matthew Pratt Guterl, Rudy Professor of American Studies, Indiana University