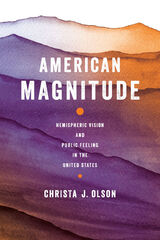 At a moment in US politics when racially motivated nationalism, shifting relations with Latin America, and anxiety over national futures intertwine, understanding the long history of American preoccupation with magnitude and how it underpins national identity is vitally important. In American Magnitude, Christa J. Olson tracks the visual history of US appeals to grandeur, import, and consequence (megethos), focusing on images that use the wider Americas to establish US character. Her sources—including lithographs from the US-Mexican War, pre–Civil War paintings of the Andes, photo essays of Machu Picchu, and WWII-era films promoting hemispheric unity—span from 1845 to 1950 but resonate into the present.

Olson demonstrates how those crafting the appeals that feed the US national imaginary—artists, scientists, journalists, diplomats, and others—have invited US audiences to view Latin America as a foil for the greatness of their own nation and encouraged white US publics in particular to see themselves as especially American among Americans. She reveals how each instance of visual rhetoric relies upon the eyes of others to instantiate its magnitude—and falters as some viewers look askance instead. The result is the possibility of a post-magnitude United States: neither great nor failed, but modest, partial, and imperfect.

AUTHOR BIOGRAPHY
Christa J. Olson is Professor of Composition and Rhetoric at the University of Wisconsin–Madison. She is the author of Constitutive Visions: Indigeneity and Commonplaces of National Identity in Republican Ecuador.
REVIEWS
“Olson’s skillful dissection of how visual images inspire feelings of Americanness is a powerful insight into how national identity is grounded in assumptions of racial and cultural superiority, and speaks in important ways to this cultural moment.” —Lois Agnew, author of Outward, Visible Propriety: Stoic Philosophy and Eighteenth-Century British Rhetorics


“Olson offers a powerful rhetorical analysis of American claims to greatness. In a context where such greatness is often taken as self-evident or manifest, this study of American magnitude as a matter of persuasion and hemispheric public feeling is vital and extremely welcome. —Naomi Greyser, author of On Sympathetic Grounds: Race, Gender, and Affective Geographies in Nineteenth-Century North America

Introduction    A Glance at the Map