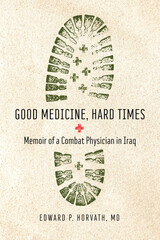 Good ​Medicine, Hard Times is the moving memoir of one of the most senior-ranking combat physicians to have served on the battlefields of the second Iraq war. Former US Army Colonel Edward P. Horvath, MD, brings readers through the intricacies of war as he relates stories of working to save the lives of soldiers, enemies, and civilians alike and shares the moral dilemmas faced by medical professionals during war. Enlisting in the Army as a fifty-nine-year-old physician, Dr. Horvath knew that he had a greater calling in life: to save the “neighbor’s kid”—no matter who that neighbor or the kid might be. Over his three deployments, he strived to do that amid cultural clashes, insurgent attacks, military controversy, and the suffering of children caught in the crossfire. In his clear-eyed, empathetic, and unforgettable account, he shows what it means to provide compassionate care in the most trying of circumstances, always keeping in mind that every person he cares for is someone’s child.
AUTHOR BIOGRAPHY
Edward P. Horvath, MD, is a veteran of the US Army Reserve Medical Corps. In 2011, he was Task Force Deputy Commander and Chief of Clinical Services for a combat support hospital near Tikrit, Iraq. Previously, he staffed the emergency room and outpatient clinic at the same base. Colonel Horvath was awarded the Bronze Star Medal and later received one of the nation’s highest military honors, the Legion of Merit. In 2013, he received the American Red Cross Hero Award for extraordinary courage in saving lives. He is a primary care physician at the Veterans Affairs Medical Center in Cleveland, Ohio.
REVIEWS
“[Good Medicine, Hard Times] is valuable for its on-the-ground details about the Iraq conflict, its granular evocation of day-to-day life during wartime, but even more so for its witness to the selflessness of emergency doctoring. The world would be a better place if we all treated each another with the concern, compassion and caring that Dr. Horvath prescribes.” —Samuel Sweeney, Wall Street Journal


“A compelling story of the professionalism, compassion, and life-saving capacity our Army doctors bring to the battlefield—and of the lasting burdens they bear.” —General George W. Casey Jr., US Army (Ret.)


“An uncommon story of a physician-soldier with an unwavering commitment to serve America’s sons and daughters on the battlefield.” —Brigadier General Lisa L. Doumont, US Army (Ret.)