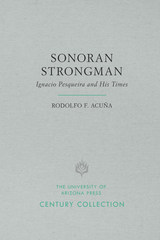 BUY
Sonoran Strongman: Ignacio Pesqueira and His Times
by Rodolfo F. Acuña
University of Arizona Press, 1974
Paper: 978-0-8165-3450-0
Cloth: 978-0-8165-0310-0
Sonoran Strongman provides an in-depth look at a turbulent period in Mexico's history. During this era, Sonora was plagued with domestic unrest and threatened by foreign invasion. The state's citizens, hoping Ignacio Pesqueira would be the "man of action" capable of restoring order, elected him governor by an overwhelming vote. He became a virtual dictator and ruled Sonora from 1856–1876. Pesqueira was the product of troubled times, and the times shaped his destiny. Author Acuña presents an authoritative account of the "Strongman's" rise to power and vividly portrays the suffering of northern Mexico's people.
AUTHOR BIOGRAPHY
Rodolfo F. Acuña in 1969 became the first chairman of the Chicano Studies Department at California State University at Northridge, one of the largest such programs in the U.S. He also is the author of The Story of the Mexican American, Cultures in Conflict, A Mexican American Chronicle, and Occupied America: The Chicano's Struggle for Liberation.