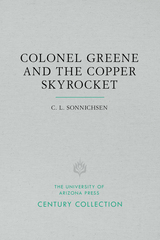 "A solid account of a southwestern 'character' who has flitted in and out of frontier and economic history."—American Historical Review

"A creditable work on a fascinating individual. In delightful writing style [Sonnichsen] has reconstructed Greene's life, explaining the ambitions as well as the frailties of this extraordinary entrepreneur."—History

"A rewarding study of the later days of mining."—Arizona and the West
AUTHOR BIOGRAPHY
C. L. Sonnichsen (Ph.D., Harvard) has been investigating and writing about his major interests—the history, literature, and folklore of the Southwest—since his arrival in the area in 1931 to teach English at what has since become the University of Texas at El Paso. His published works of Southwestern history and fiction include Cowboys and Cattle Kings, Ten Texas Feuds, Billy King’s Tombstone, and Alias Billy the Kid. A retired professor, Sonnichsen is editor of the Journal of Arizona History and director of publications for the Arizona Historical Society.