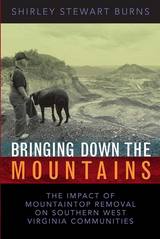 Coal is West Virginia’s bread and butter. For more than a century, West Virginia has answered the energy call of the nation—and the world—by mining and exporting its coal. In 2004, West Virginia’s coal industry provided almost forty thousand jobs directly related to coal, and it contributed $3.5 billion to the state’s gross annual product. And in the same year, West Virginia led the nation in coal exports, shipping over 50 million tons of coal to twenty-three countries. Coal has made millionaires of some and paupers of many. For generations of honest, hard-working West Virginians, coal has put food on tables, built homes, and sent students to college. But coal has also maimed, debilitated, and killed.

Shirley Stewart Burns holds a BS in news-editorial journalism, a master’s degree in social work, and a PhD in history with an Appalachian focus.  A native of Wyoming County in the southern West Virginia coalfields and the daughter of an underground coal miner, she has a passionate interest in the communities, environment, and histories of the southern West Virginia coalfields. She lives in Charleston, West Virginia. She co-edited Coal Country: Rise Up Against Mountaintop Removal Mining with Mary-Lynn Evans and Silas House.


•Acknowledgments
•List of Abbreviations
•Introduction
Open for Business: The Shameful Legacy of Natural Resource Extraction
•Chapter 1
Making Molehills out of Mountains: Power Relationships and the Rise of Strip Mining in Southern West Virginia
•Chapter 2
Solidarity Forever? The UMWA and Southern West Virginia
•Chapter 3
To Dance with the Devil: The Social Impact of MTR
•Chapter 4
“You Scratch My Back and I’ll Scratch Yours”: The Political Economy of Coal
•Photographs following page 98
•Chapter 5
Showdown in Charleston: The Judicial System and MTR
•Chapter 6
“Show Me Where to Put My Fishing Pole”: The Environmental Impact of MTR
•Epilogue
Requiem for the Mountains? Central Appalachian Coalfields at a Crossroad
•Notes
•Bibliography
•Appendix 1
An excerpt from John D. Rockefeller’s “Citizens to Abolish Surface Mining” Speech
•Appendix 2
Coal Impoundments Found in the Nine Southern Coalfield Counties of West Virginia
•Appendix 3
Coal-slurry Spill Information for the Nine Southern Coalfield Counties of West Virginia
•Index