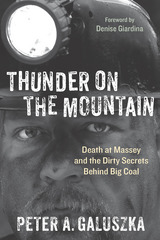 Thunder on the Mountain: Death at Massey and the Dirty Secrets behind Big Coal
by Peter A. Galuszka
foreword by Denise Giardina
West Virginia University Press, 2014
Paper: 978-1-940425-24-5

With a foreword by Denise Giardina

On April 5, 2010, an explosion ripped through Massey Energy’s Upper Big Branch Mine, killing twenty-nine coal miners. This tragedy was the deadliest mine disaster in the United States in forty years—a disaster that never should have happened. These deaths were rooted in the cynical corporate culture of Massey and its notorious former CEO Don Blankenship, and were part of an endless cycle of poverty, exploitation, and environmental abuse that has dominated the Appalachian coalfields since coal was first discovered there. And the cycle continues unabated as coal companies bury the most insidious dangers deep underground, all in search of higher profits, and hide the true costs from regulators, unions, and investors alike. But the disaster at Upper Big Branch goes beyond the coalfields of West Virginia. It casts a global shadow, calling into bitter question why coal miners in the United States are sacrificed to erect cities on the other side of the world, why the coal wars have been allowed to rage, polarizing the country, and how the world’s voracious appetite for energy is satisfied at such horrendous cost.

With Thunder on the Mountain, Peter A. Galuszka pieces together the true story of greed and negligence behind the tragedy at the Upper Big Branch Mine, and in doing so he has created a devastating portrait of an entire industry that exposes the coal-black motivations that led to the death of twenty-nine miners and fuel the ongoing war for the world’s energy future.

This paperback edition contains a foreword by Denise Giardinia that provides an update on Massey Energy and Donald Blankenship, Chairman and CEO of Massey Energy Company during the UBB disaster, and recounts her own experiences with Massey Energy and the United Mine Workers Association in the 1980s. This edition also includes a notes section and a bibliography.

Peter A. Galuszka is a veteran journalist who has covered worldwide energy issues, especially coal, for several decades. A former West Virginia resident, he logged thousands of miles on the windy mountain roads of Central Appalachia and traveled to Mongolia, China, and Japan to track down the Massey story. The former Moscow bureau chief for Businessweek, he now lives in Chesterfield, Virginia.

Denise Giardina grew up in a coal camp in McDowell County, West Virginia. She is a writer, ordained Episcopal Church deacon, and community activist. Her novels include Storming Heaven and The Unquiet Earth, both of which are set in the Appalachian coalfields.