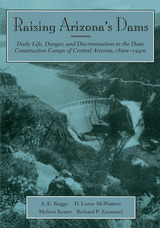 This is the engrossing story of the unsung heroes who did the day-to-day work of building Arizona's dams, focusing on the lives of laborers and their families who created temporary construction communities during the building of seven major dams in central Arizona. The book focuses primarily on the 1903-1911 Roosevelt Dam camps and the 1926-1927 Camp Pleasant at Waddell Dam, although other camps dating from the 1890s through the 1940s are discussed as well. The book is liberally illustrated with historic photographs of the camps and the people who occupied them while building the dams.
REVIEWS
"The authors treat us to an almost seamless marriage of history and archaeology, supported by a 'bottom up' approach and a public history sensibility. The result is a very readable account of the daily life of the transient wage workers who built the temporary construction towns and the enduring water management systems."—Journal of Arizona History

"It is a thoughtful analysis of people of divergent backgrounds who came together for the purpose of making a living, an analysis of the towns they built and the lives they led. This most readable book is handsomely packaged . . . chock-full of fascinating historical photographs."—Tombstone Epitaph

"An excellent overview."—Journal of the West

"Social history of the working class is a difficult task. The combination of archaeological evidence with the historical record has given us this superb example of 'bottom-up history.'"—The Public Historian

"It offers a convincing, well-written demonstration that transitory communities of wage-earning laborers have long played a significant role in Western history. As such, Raising Arizona's Dams deserves both popular and scholarly attention."—Technology and Culture