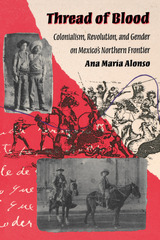 This book is about the construction and tranformation of peasant military colonists on Mexico's northern frontier from the late 18th through the early 20th century. Though the majority of the data comes from the pueblo of Namiquipa in the state of Chihuahua, the argument has broader implications for the study of northern Mexico, frontier societies, and our understanding of the northern armies in the 1910 Revolution. The study is rare for its integration of several levels, placing an analysis of gender and ethnicity within a specific historical period.

The author demonstrates that a distinct kind of frontier serrano society was generated in Namiquipa between the mid-18th and mid-19th centuries. In exchange for keeping the Apaches at bay, colonists were provided with arms and land grants. At the same time, they developed a gendered sense of ethnic identity that equated honor with land, autonomy, and a kind of masculinity that distinguished the "civilized" colonist from the "barbarous" Indian. While this identity was itself ordered hierarchically between men and women, and between "Hispanic" and "Indian," it also provided serranos with a sense of pride and dignity that was not directly associated with wealth.

After the defeat of the Apaches, and with increased state control during the last decades of the Porfiriato, the serranos on the frontier were transformed from bulwarks of order to victims of progress. The expansion of capitalism and the manipulation of local political office by men no longer accountable to communal norms eroded the legitimacy of both powerholders and the central state. In response, serranos constructed an ideology of history based on past notions of masculine honor and autonomy. This ideology motivated their confrontations with the Mexican state during the 1890s and also served as the force behind their mobilization in the 1910 revolution.
AUTHOR BIOGRAPHY
A native of Cuba, Ana María Alonso is an assistant professor of anthropology at the University of Arizona. Thread of Blood was published with the support of the Clara Lee Tanner Publishing Fund for the first book by an anthropologist.