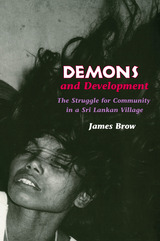 In contemporary Sri Lanka, long-established modes of rural life are being disrupted in the name of progress. As this occurs, instances of "demonic possession" have been known to take place—incidents that may both express the conflicts that result and attempt to resolve them. When residents of the village of Kukulewa were promised sixty new houses, a factional rift arose between those who benefited from the project and those who did not. The breach between what became in effect two separate villages resulted in both divisive accusations of sorcery and spirit-inspired appeals for cooperation.

James Brow witnessed these possession trances and sorcery accusations as they occurred, enabling him to convey this richly textured story interweaving political factionalism and troubled spirits. Official projects of development have proceeded apace in Sri Lanka, but until now there have been few accounts of their tendency to tear apart the fabric of rural society. Demons and Development combines an engaging narrative of how development was experienced in one particular village with an original contribution to theories of hegemony, the social anthropology of South Asia, the ethnography of nationalism, and the sociology of development.
AUTHOR BIOGRAPHY
James Brow is chairman of the Department of Anthropology at the University of Texas at Austin.
TABLE OF CONTENTS
Contents
List of Illustrations
Acknowledgments
Lists of Abbreviations
Cast of Characters
1. Ceremony in Samadigama
2. Orientations
3. Of Savages and Kings
4. The Village Community Confronts the Markets
5. Party Politics and Nationalist Rhetoric
6. The Awakening Village
7. The Rise of the Fernandos
8. Life in Samadigama
9. Gods and Demons
10. Offerings to the Gods
11. Private Practice
12. Reflections
Notes
Glossary
References Cited
Index