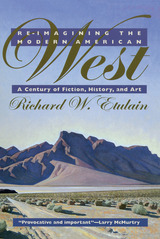 From the Mississippi west to the Pacific, from border to border north and south, here is the first thorough overview of novelists, historians, and artists of the modern American West. Examining a full century of cultural-intellectual forces at work, a leading authority on the twentieth-century West brings his formidable talents to bear in this pioneering study. Richard W. Etulain divides his book into three major sections. He begins with the period from the 1890s to the 1920s, when artists and authors were inventing an idealized frontier--especially one depicting initial contacts and conflicts with new landscapes and new peoples. The second section covers the regionalists, who focused on regional (mostly geographical) characteristics that shaped distinctively "western" traits of character and institutions. The book concludes with a discussion of the postregional West from World War II to the ’90s, a period when novelists, historians, and artists stressed ethnicity, gender, and a new environmentalism as powerful forces in the formation of modern western society and culture. Etulain casts a wide net in his new study.

He discusses novelists from Jack London to John Steinbeck and on to Joan Didion. He covers historians from Frederick Jackson Turner to Earl Pomeroy and Patricia Nelson Limerick, and artists from Frederic Remington and Charles Russell to Georgia O’Keeffe and R. C. Gorman. The author places emphasis on women painters and authors such as Mary Hallock Foote, Mary Austin, Willa Cather, and Judith Baca. He also stresses important works of ethnic writers including Leslie Marmon Silko, Rudolfo Anaya, and Amy Tan. An intriguing survey of tendencies and trends and a well-defined profile of influences and outgrowths, this book will be valuable to students and scholars of western culture and history, American studies, and related disciplines. General readers will appreciate the book’s balanced structure and spirited writing style. All readers, whatever their level of interest, will discover the major cultural inventions of the American West over the past one hundred years.
AUTHOR BIOGRAPHY
Richard W. Etulain is a professor of history and the director of the Center for the American West at the University of New Mexico, where he has taught since 1979. He is the author or editor of more than twenty books, most of which focus on the history and literature of the American West.