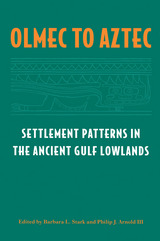 Olmec to Aztec: Settlement Patterns in the Ancient Gulf Lowlands
edited by Barbara L. Stark and Philip J. Arnold
University of Arizona Press, 1997
Cloth: 978-0-8165-1689-6
Archaeological settlement patterns—the ways in which ancient people distributed themselves across a natural and cultural landscape—provide the central theme for this long-overdue update to our understanding of the Mexican Gulf lowlands Olmec to Aztec offers the only recent treatment of the region that considers its entire prehistory from the second millennium B.C. to A.D. 1519. The editors have assembled a distinguished group of international scholars, several of whom here provide the first widely available English-language account of ongoing research. Several studies present up-to-date syntheses of the archaeological record in their respective areas. Other chapters provide exciting new data and innovative insights into future directions in Gulf lowland archaeology. Olmec to Aztec is a crucial resource for archaeologists working in Mexico and other areas of Latin America. Its contributions help dispel long-standing misunderstandings about the prehistory of this region and also correct the sometimes overzealous manner in which cultural change within the Gulf lowlands has been attributed to external forces. This important book clearly demonstrates that the Gulf lowlands played a critical role in ancient Mesoamerica throughout the entirety of pre-Columbian history.
AUTHOR BIOGRAPHY
Barbara L. Stark is chair and a professor of anthropology at Arizona State University. Philip J. Arnold II is an associate professor of anthropology at Loyola Univerasity.