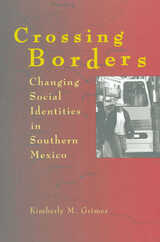 "Defining borders is a complex task, especially today as globalization accelerates at an unprecedented rate. We have entered a transnational age, one in which borders are more porous." So says Kimberly M. Grimes in Crossing Borders: Changing Social Identities in Southern Mexico, her investigation of migration to the United States from Putla de Guerrero, Oaxaca. Featuring testimonies of residents and migrants, Grimes allows local voices to describe the ways in which Putlecans find themselves negotiating among competing social values. The testaments of the Putlecans indicate that the changes occurring in their small town as a result of the circular migration to and from such immigrant enclaves as Atlantic City, New Jersey, are viewed with mixed emotions. Putlecans recognize the financial need to migrate north but they rue the increased consumerism, pollution, and trash that comes with the rising wealth. Men show off by driving their fancy cars with New Jersey tags around the tiny Mexican town, but influenced by Anglo culture, they also provide greater assistance in child care and housework. Women find the sexual and social freedoms of the United States liberating, but they still return home to baptize their babies. Grimes reminds us, however, that the Putlecans are not passive recipients of change but are actively embracing it, creating it, and mediating it. By reaching across the border to investigate migration, Grimes shows us that social and cultural change are not just the result of national and transnational influences, but are also locally negotiated phenomena.
AUTHOR BIOGRAPHY
Kimberly M. Grimesis Assistant Professor of Anthropology at the University of Delaware in Georgetown and Director of Made By Hand International Cooperative in Bethany, Delaware.