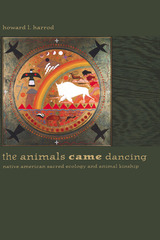 The Native American hunter had a true appreciation of where his food came from and developed a ritual relationship to animal life—an understanding and attitude almost completely lacking in modern culture. In this major overview of the relation between Indians and animals on the northern Great Plains, Howard Harrod recovers a sense of the knowledge that hunting peoples had of the animals upon which they depended and raises important questions about Euroamerican relationships with the natural world. Harrod's account deals with twelve Northern Plains peoples—Lakota, Blackfeet, Cheyenne, Pawnee, and others—who with the arrival of the horse in the eighteenth century became the buffalo hunters who continue to inhabit the American imagination. Harrod describes their hunting practices and the presence of animals in their folklore and shows how these traditions reflect a "sacred ecology" in which humans exist in relationship with other powers, including animals. Drawing on memories of Native Americans recorded by anthropologists, fur traders, missionaries, and other observers, Harrod examines cultural practices that flourished from the mid-eighteenth to the mid-nineteenth century. He reconstructs the complex rituals of Plains peoples, which included buffalo hunting ceremonies employing bundles or dancing, and rituals such as the Sun Dance for the renewal of animals. In a closing chapter, Harrod examines the meanings of Indian-animal relations for a contemporary society that values human dominance over the natural world—one in which domestic animals are removed from our consciousness as a source of food, wild animals are managed for humans to "experience," and hunting has become a form of recreation. His meticulous scholarship re-imagines a vanished way of life, while his keen insights give voice to a hunger among many contemporary people for the recovery of a ritual relationship between themselves and the natural sources of their lives.
AUTHOR BIOGRAPHY
Howard L. Harrod is Oberlin Alumni Professor of Social Ethics and Sociology of Religion and Professor of Religious Studies at Vanderbilt University.
TABLE OF CONTENTS
Contents
Preface
Acknowledgments
Animals and Cultural Values
Chapter 1. Northern Plains Hunters
Chapter 2. In the Beginning There Were Animals
Chapter 3. The Gift of Animals
Chapter 4. Animal Rituals on the Northern Plains
Chapter 5. Renewing the Animals
Chapter 6. Humans and Animals in the Twenty-First Century
Epilogue
Notes
Bibliography
Index