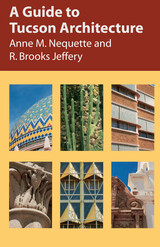 A Guide to Tucson Architecture
by Anne M. Nequette and R. Brooks Jeffery
University of Arizona Press, 2002
Paper: 978-0-8165-2083-1
Tucson is a city rich in architectural heritage spanning three cultures, with a history of human settlement that makes it one of the oldest continually inhabited cities in the United States. Hispanic barrios, American architectural forms, and remnants of a prehistoric Native American past give Tucson a unique and eclectic identity unlike any other city. This book is a comprehensive, richly illustrated guide to Tucson's significant historic and contemporary architectural resources—not only buildings, but ruins, open spaces, landscapes, and other elements that define the city’s built environment. It captures all facets of Tucson’s architecture, from one-of-a-kind homes on Main Avenue and historic downtown buildings to destination resorts in the Catalina Foothills and other modern structures. In this book readers will find:
- walking and driving tours of fourteen areas, complete with maps, beginning with central neighborhoods such as Barrio Historico and Armory Park and moving on to the rapidly expanding outlying areas
- annotated descriptions of individual structures—residences, schools, churches, government buildings, offices, commercial establishments, and others—enhanced by more than 120 photographs
- profiles of prominent Tucson architects, including Henry Trost, Josias Joesler, and Judith Chafee
- a guide to architectural styles found in Tucson—with examples—and a glossary of terms. A Guide to Tucson Architecture is the only book to offer such an extensive guided tour of one of America's favorite destination cities, capturing both its historic character and its dynamic growth. Through it, readers will appreciate the holistic balance of influences that has created Tucson's unique architectural expression and that defines its modern identity.
AUTHOR BIOGRAPHY
Anne M. Nequette has taught architectural history and design in the University of Arizona's School of Architecture since 1996. During her tenure in the profession she has worked in Tucson on the design and construction of schools and civic buildings and has been active in community education in architecture. R. Brooks Jeffery is Coordinator of Preservation Studies at the University of Arizona College of Architecture, Planning, and Landscape Architecture, where he has documented and interpreted the significance of Tucson architecture since 1988. He is the author of Joesler & Murphey: An Architectural Legacy for Tucson.