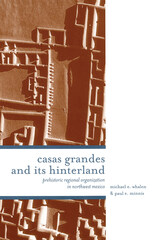 Casas Grandes and Its Hinterlands: Prehistoric Regional Organization in Northwest Mexico
by Michael E. Whalen and Paul E. Minnis
University of Arizona Press, 2001
Cloth: 978-0-8165-2097-8
Casas Grandes, or Paquimé, is one of the most important settlements in the prehistoric North American Southwest. The largest and most complex community in the Puebloan world, it was characterized by its principal excavator, Charles Di Peso, as an outpost of the Toltec empire, which used it as a trade link between Mesoamerican and southwestern cultures. Michael E. Whalen and Paul E. Minnis have worked extensively in the Casas Grandes area and now offer new research arguing that it was not as similar to the highly developed complex societies of Mesoamerica as has been thought. In the first book of its kind in 25 years, the authors analyze settlement pattern data from more than 300 communities in the area surrounding Casas Grandes to show that its Medio period culture was a local development. Whalen and Minnis propose that Casas Grandes lacked extensive stratification, well-established decision-making hierarchies, and formalized positions of authority. They suggest instead that emerging elites used bribes, promises, and threats to build factions and extend their power. The communities at the periphery are shown to have had varying levels of social and economic interaction with Casas Grandes. This innovative study offers a new model for the rise and fall of Casas Grandes that departs considerably from the view most scholars have come to accept and will be of interest to all concerned with the comparative study of emergent complexity. It clearly shows that the idea of extensive regional centralization by Casas Grandes is no longer tenable and merits reconsideration by the archaeological community.
AUTHOR BIOGRAPHY
Michael E. Whalen is Professor of Anthropology at the University of Tulsa. Paul E. Minnis is Associate Professor of Anthropology at the University of Oklahoma. Paul E. Minnis is Associate Professor of Anthropology at the University of Oklahoma.