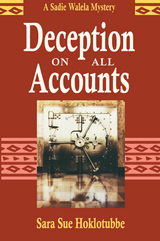 Is murder always a simple transaction? Don't bank on it.

Sadie Walela's life is about to be turned upside down.

One morning Sadie unlocks the door at the Mercury Savings Bank and confronts a robber who's been lying in wait for her and her fellow employees. He flees after stealing money and killing her coworker. When a whirlwind of events leaves Sadie herself under suspicion, she sets out to clear her name.

This banker turned sleuth is suddenly plunged into an unfamiliar world in which people are not always as they appear—not her employer, not the homeless man she's befriended, not the police officer who takes an interest in the case, not the man she falls in love with. And, as she's beginning to imagine, not even herself.

Sadie is a blue-eyed Cherokee living in northeastern Oklahoma, a half-blood who finds she sometimes has to adapt to get by in the white man's world. As she faces adversity at each bend in the road, she adapts and moves forward, much as her father's ancestors did. But as she comes to term with murder, romance, and her hopes for a career, Sadie finds deception on all accounts.