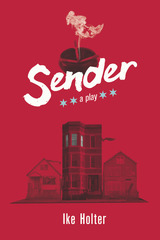 Ike Holter’s Sender thrives on the contrast between order and chaos and the tensions that emerge as we leave childhood and adolescence behind to contend with the demands of “adulting.” In this comedy, Holter presents us with four millennial friends wrestling with these issues. While each is at a different stage of “growing up,” one of the friends has disappeared and has been presumed dead. Yet, at the beginning of the play, he returns and completely upends the balance established in his absence. This witty, foul mouthed, and razor-sharp play asks: “What does growing up mean . . . and is it even desired in this day and age?”

Sender is one of seven plays in Holter’s Rightlynd Saga, all to be published by Northwestern University Press. Holter’s plays are set in Chicago’s fictional fifty-first ward. The other plays in the cycle are Exit Strategy, Lottery Day, Prowess, Red Rex, Rightlynd, and The Wolf at the End of the Block.
AUTHOR BIOGRAPHY
IKE HOLTER is a resident playwright at Victory Gardens Theater and the artistic director of The Roustabouts. His plays have been produced at the Steppenwolf Garage, the Philadelphia Theatre Company, Off-Broadway at Barrow Street Theatre and Cherry Lane Theatre, and elsewhere. He is the 2017 winner of the Windham-Campbell Literature Prize for drama. His other produced plays include Exit Strategy, Loom, B-Side Studio, The Wolf at the End of the Block, Prowess, and The Light Fantastic.
TABLE OF CONTENTS
Title Page
Copyright
Contents
Production History
Sender
REQUEST ACCESSIBLE FILE