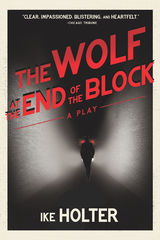 Taut and fast-paced, The Wolf at the End of the Block tells the story of Abe, a resident of the Rightlynd neighborhood of Chicago, who seeks justice after a mysterious, late-night interatction at a boarded-up bar. The intrigue envelops Abe, his sister, his boss, and a morally complicated reporter in pursuit of the truth. But as the clock ticks down, the play discloses the hidden motives of each character, leading to a finale of unpredictable twists, turns, and reveals.

A modern-day neo-noir, The Wolf at the End of the Block remixes several different genres to present a new kind of thriller that is socially conscious, relentlessy suspenseful, and bitingly funny. Praised for its power and grace, the play is one of Holter’s most unforgettable.

The Wolf at the End of the Block is one of seven plays in Holter’s Rightlynd Saga, set in Chicago’s fictional fifty-first ward. The other plays in the cycle are Rightlynd, Exit Strategy, Sender, Prowess, Red Rex, and Lottery Day.
AUTHOR BIOGRAPHY
IKE HOLTER is a resident playwright at Victory Gardens Theater and the artistic director of The Roustabouts. His plays have been produced at the Steppenwolf Garage, the Philadelphia Theatre Company, Off-Broadway at Barrow Street Theatre and Cherry Lane Theatre, and elsewhere. He is the 2017 winner of the Windham-Campbell Literature Prize for drama.