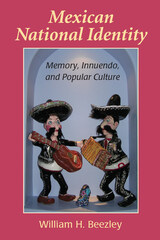 In this enlightening book, the well-known historian William Beezley contends that a Mexican national identity was forged during the nineteenth century not by a self-anointed elite but rather by a disparate mix of ordinary people and everyday events. In examining independence festivals, children’s games, annual almanacs, and the performances of itinerant puppet theaters, Beezley argues that these seemingly unrelated and commonplace occurrences—not the far more self-conscious and organized efforts of politicians, teachers, and others—created a far-reaching sense of a new nation.

In the century that followed Mexico’s independence from Spain in 1821, Beezley maintains, sentiments of nationality were promulgated by people who were concerned not with the promotion of nationalism but with something far more immediate—the need to earn a living. These peddlers, vendors, actors, artisans, writers, publishers, and puppeteers sought widespread popular appeal so that they could earn money. According to Beezley, they constantly refined their performances, as well as the symbols and images they employed, in order to secure larger revenues.

Gradually they discovered the stories, acts, and products that attracted the largest numbers of paying customers. As Beezley convincingly asserts, out of “what sold to the masses” a collective national identity slowly emerged. Mexican National Identity makes an important contribution to the growing body of literature that explores the influences of popular culture on issues of national identity. By looking at identity as it was fashioned “in the streets,” it opens new avenues for exploring identity formation more generally, not just in Mexico and Latin American countries but in every nation.

Check out the New Books in History Interview with Bill Beezley!
AUTHOR BIOGRAPHY
William H. Beezley established a reputation as one of the pioneer cultural historians of Mexico with the publication of his well-known book Judas at the Jockey Club and Other Episodes of Porfirian Mexico. His investigations into both Mexican and Latin American history have resulted in thirteen books, including the standard Oxford History of Mexico, edited with Michael C. Meyer. He and Judy Ewell focused on the lives of ordinary people in the past in their widely used text The Human Tradition in Latin America, which resulted in a series of books on the human tradition in other places and other times. Beezley is currently completing a concise history of Mexicans in the Revolution with Colin MacLachlan. Recently, his research has turned to wine in Latin America, and he has appeared as a guest on the Emmy Award-winning program The Desert Speaks, to discuss wine in Baja California del Norte and in Chile. He has begun a book on the Malbec varietal in the Americas. His Mexican investigations now focus on popular culture, especially sports and music of the 1950s. As professor history, he teaches at the University of Arizona.
TABLE OF CONTENTS