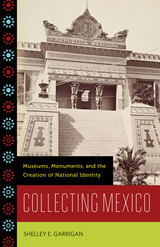 Collecting Mexico centers on the ways in which aesthetics and commercialism intersected in officially sanctioned public collections and displays in late nineteenth-century Mexico. Shelley E. Garrigan approaches questions of origin, citizenry, membership, and difference by reconstructing the lineage of institutionally collected objects around which a modern Mexican identity was negotiated. In doing so, she arrives at a deeper understanding of the ways in which displayed objects become linked with nationalistic meaning and why they exert such persuasive force.

Spanning the Porfiriato period from 1867 to 1910, Collecting Mexico illuminates the creation and institutionalization of a Mexican cultural inheritance. Employing a wide range of examples—including the erection of public monuments, the culture of fine arts, and the representation of Mexico at the Paris World’s Fair of 1889—Garrigan pursues two strands of thought that weave together in surprising ways: national heritage as a transcendental value and patrimony as potential commercial interest.