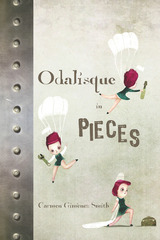 Odalisque in Pieces
by Carmen Giménez Smith
University of Arizona Press, 2009
Paper: 978-0-8165-2788-5
In her debut poetry collection, Carmen Giménez Smith illuminates Latina identity in the prismatic light of postcolonial history, feminism, myth, and the fragmentation of modernity. From these disparate elements she fashions a female persona—“clairvoyant with great shoes”—who is both bracingly modern and movingly vulnerable. Through her poems we traverse the landscape of a woman’s life (girl, mother, lover), navigating a terrain tinted with mythology and relic yet still fresh and uncharted. The poems revolve around issues of identity—and the ways in which identity is both inherited and constructed/reconstructed. Or, as one poem puts it, “The planet floating backwards / whirling some of us older than the stars, some of us nascent and bare.” Although she employs techniques of avant-garde poetry, Giménez Smith shades and deepens the New World landscape into a territory of rare lyric intensity and energy. Humorous, sly, sexy, sophisticated, these poems are animated by passion and hard-won knowledge.

In these poems we encounter such strange beauties as a girl assembling and disassembling, a moth trapped in a glass of water, new-age fairy godmothers, and a lark who sings for the milkman. Yet we are also made aware of how these beauties reflect the speaker’s troubles—her effort to employ, in the words of one of her most memorable poems, “Only the invisible post where she writes the encounters / with air’s lusters. Only the imagined hour / with which she’s made a fragile craft.”

Vivid and charged with an inner light, these are poems that linger and expand in the mind and memory.