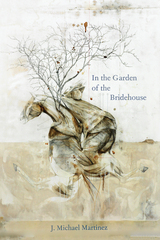 Through lyrical procedures of self-immolation, this brave new collection by J. Michael Martinez interrogates the sundry roles language, myth, and sexuality play for the self and the other in the recoverable and irrecoverable past. Parallel to his award-winning first collection Heredities, J. Michael Martinez pushes the boundaries of poetic form, wedding historically oppositional lyrical traditions to deliver a collection unlike any other.

Turning the page into a visual field, as in the deconstructed musical score telling the tale of La Llorona, In the Garden of the Bridehouse questions the line between visual art and poetry. The work employs the vernacular, the stylized language of theory, and the blank canvas of the page in its exploration of the known and unknowable.

Throughout the work, Martinez paradoxically exercises both a lyrical minimalism and a baroque poetic, uniting Mesoamerican preconquest imaginary with the sensuality of the Biblical Song of Songs, cultivating a lyrical space wherein contrasting potentials are—as one—realized in their shared promise.
AUTHOR BIOGRAPHY
J. Michael Martinez is the author of Heredities, his first collection of poetry, which was awarded the Academy of American Poets’ Walt Whitman Award. He lives in Denver.
TABLE OF CONTENTS