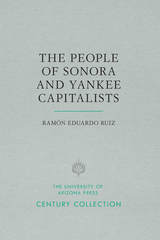 Capitalism, the economic system of Western Europe and the United States at the turn of the century, had a major impact on every country of the Third World. In the Western Hemisphere, no country escaped its influence, particularly the North American version, increasingly omnipotent. Mexico, next door to the powerful colossus, often felt the brunt of that impact. The People of Sonora and Yankee Capitalists examines how the advent of North American dollars between 1882 and 1910 helped reshape the economic, social, and political contours of a Mexican province on the border of Arizona. The activity of Yankee promoters, particularly miners, land speculators, and cattle barons, altered dramatically the colonial structure left behind by its former Spanish masters. Even the psychology of the inhabitants of Sonora underwent a kind of metamorphosis. This book, in short, explains what happened to Mexico’s traditional society when Yankee capitalists made their appearance.
AUTHOR BIOGRAPHY
Ramón Eduardo Ruiz, the son of Mexican parents, has been writing about Mexico since 1951. A professor of Latin American history at the University of California (San Diego), he is the author of more than a dozen books, nearly all on Mexican history. The Great Rebellion: Mexico, 1905–1924 won the prize for best book of 1981 of the Pacific Coast Council on Latin American Studies, and “Book World” of the Washington Post picked his Cuba: The Making of a Revolution as one of the best history books of 1968.