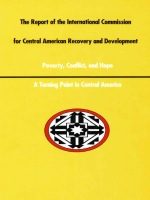 The 1980s were one of the most turbulent decades in Central America’s history, a history that has been marked by more than its share of strife and upheaval. The wars, economic hardship, and political unrest and instability that have dominated news of the region have been years in the making, the products of flawed and inequitable economic, social, and political structures.
The International Commission for Central American Recovery and Development (ICCARD) was formed to provide a thorough diagnosis and analysis of Central America’s problems and to draft a comprehensive long-term strategy to move the region from decline to development. In this report ICCARD—through forty-five international experts in economics, public policy, management, and development it assembled for this purpose—attempts to rise above rhetoric and simplistic remedies to focus on well-reasoned, thorough, and realistic approaches to economic and social development.
This volume reviews the unequal access of marginal groups to political and economic participation, the precarious situation of Central American financial institutions, the international debt situation, the prospects for regional political and economic integration, and other aspects of regional development. Each of these challenges is addressed by specific recommendations to the Central American governments, the governments of the industrialized nations, and international organizations.
REQUEST ACCESSIBLE FILE