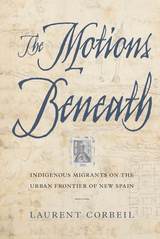 As Mexico entered the last decade of the sixteenth century, immigration became an important phenomenon in the mining town of San Luis Potosí. New silver mines sparked the need for labor in a region previously lacking a settled population. Drawn by new jobs, thousands of men, women, and children poured into the valley between 1591 and 1630, coming from more than 130 communities across northern Mesoamerica.

The Motions Beneath is a social history of the encounter of these thousands of indigenous peoples representing ten linguistic groups. Using baptism and marriage records, Laurent Corbeil creates a demographic image of the town’s population. He studies two generations of highly mobile individuals, revealing their agency and subjectivity when facing colonial structures of exploitation on a daily basis.

Corbeil’s study depicts the variety of paths on which indigenous peoples migrated north to build this diverse urban society. Breaking new ground by bridging stories of migration, labor relations, sexuality, legal culture, and identity construction, Corbeil challenges the assumption that urban indigenous communities were organized along ethnic lines. He posits instead that indigenous peoples developed extensive networks and organized themselves according to labor, trade, and social connections.
AUTHOR BIOGRAPHY
Laurent Corbeil received his PhD from McGill University and was a Social Sciences and Humanities Research Council of Canada postdoctoral fellow at the University of North Carolina at Chapel Hill. He has received grants from the UNAM-IIH and the Québec Research Funds—Society and Culture.
TABLE OF CONTENTS

Introduction
1. Origins
2. Migrations
3. Building Towns on a Borderland
4. Daily Spaces of Sociability
5. Mobility and Violence Across the Conurbation
6. The Construction of Formal Identities
Conclusion