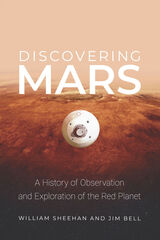 For millenia humans have considered Mars the most fascinating planet in our solar system. We’ve watched this Earth-like world first with the naked eye, then using telescopes, and, most recently, through robotic orbiters and landers and rovers on the surface.

Historian William Sheehan and astronomer and planetary scientist Jim Bell combine their talents to tell a unique story of what we’ve learned by studying Mars through evolving technologies. What the eye sees as a mysterious red dot wandering through the sky becomes a blurry mirage of apparent seas, continents, and canals as viewed through Earth-based telescopes. Beginning with the Mariner and Viking missions of the 1960s and 1970s, space-based instruments and monitoring systems have flooded scientists with data on Mars’s meteorology and geology, and have even sought evidence of possible existence of life-forms on or beneath the surface. This knowledge has transformed our perception of the Red Planet and has provided clues for better understanding our own blue world.

Discovering Mars vividly conveys the way our understanding of this other planet has grown from earliest times to the present. The story is epic in scope—an Iliad or Odyssey for our time, at least so far largely without the folly, greed, lust, and tragedy of those ancient stories. Instead, the narrative of our quest for the Red Planet has showcased some of our species’ most hopeful attributes: curiosity, cooperation, exploration, and the restless drive to understand our place in the larger universe. Sheehan and Bell have written an ambitious first draft of that narrative even as the latest chapters continue to be added both by researchers on Earth and our robotic emissaries on and around Mars, including the latest: the Perseverance rover and its Ingenuity helicopter drone, which set down in Mars’s Jezero Crater in February 2021.
AUTHOR BIOGRAPHY
William Sheehan retired from psychiatry in 2018 after a professional career spanning three decades. He is a leading historian of astronomy, with twenty-books to his name.

Jim Bell is a professor of astronomy and planetary science in the School of Earth and Space Exploration at Arizona State University. His research focuses on the geology and composition of planets, moons, asteroids, and comets, and he has authored seven popular science books.