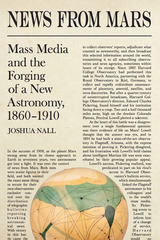 Mass media in the late nineteenth century was full of news from Mars. In the wake of Giovanni Schiaparelli’s 1877 discovery of enigmatic dark, straight lines on the red planet, astronomers and the public at large vigorously debated the possibility that it might be inhabited. As rivalling scientific practitioners looked to marshal allies and sway public opinion—through newspapers, periodicals, popular books, exhibitions, and encyclopaedias—they exposed disagreements over how the discipline of astronomy should be organized and how it should establish acceptable conventions of discourse.

News from Mars provides a new account of this extraordinary episode in the history of astronomy, revealing how major transformations in astronomical practice across Britain and America were inextricably tied up with popular scientific culture and a transatlantic news economy that enabled knowledge to travel. As Joshua Nall argues, astronomers were journalists, too, eliding practice with communication in consequential ways. As writers and editors, they played a pivotal role in the emergence of a “new astronomy” dedicated to the study of the physical constitution and life history of celestial objects, blurring harsh distinctions between those who produced esoteric knowledge and those who disseminated it.

AUTHOR BIOGRAPHY
Joshua Nall is curator of modern sciences at the Whipple Museum of the History of Science in the Department of the History and Philosophy of Science at the University of Cambridge. He is a fellow of the Royal Astronomical Society, where he serves as chair of the society’s Heritage Committee.
TABLE OF CONTENTS
Contents
Introduction
1. Writing on Mars: Imaginative Astronomy and the New Journalism
2. Annihilating Time and Space: Observatories and the Technological West
3. Constructing Canals on Mars: Event Astronomy and the "Great Mars Boom" of 1892
4. Made to Last: "Mars" in the Eleventh-Edition Encyclopaedia Britannica
Conclusion
Acknowledgments
Notes
Bibliography
Index
REQUEST ACCESSIBLE FILE