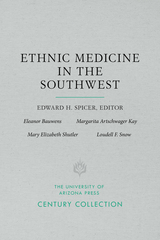 Edward H. Spicer's informative Introduction sets the stage for comparing "popular" and "scientific" medicine. "Graduates of medical schools have been taught that their body of knowledge is the one true medical tradition. The world has many medicines and thousands of practitioners who do not believe that "Western" medicine is a universal cure-all. These practitioners may be as certain that what they practice is the one true medical tradition," says Spicer. In the communities studied, the belief is that illnesses may be caused by overwork, withcraft or sin, and treatment may include herbs, prayer, or massage. Practitioners are successful and respected although they are not licenses in the legal sense.

In these alternative medical traditions, "Western" medicine may find a key to new growth and effectiveness. Ethnic Medicine in the Southwest is a fascinating look at commonly practiced arts that will interest not only ethnic and health services specialists but all those interested in cultural traditions.
AUTHOR BIOGRAPHY
Edward H. Spicer, University of Arizona Professor of Anthropology, for more than thirty years has dedicated much of his time to teaching, research and writing on the American Indians of the Southwest. He is past president of the American Anthropological Association and has received numerous honors, including the 1976 Malinowski Award given by the Society for Applied Anthropology.
TABLE OF CONTENTS
Contents
About the Authors
Southwestern Healing Traditions in the 1970s: An Introduction - Edward H. Spicer
Popular Medicine in a Black Neighborhood - Loudell F. Snow
Health and Illness in a Mexican American Barrio - Margarita Artschwager Kay
Disease and Curing in a Yaqui Community - Mary Elizabeth Shutler
Medical Beliefs and Practices Among Lower-Income Anglos - Eleanor Bauwens
Bibliography
Index