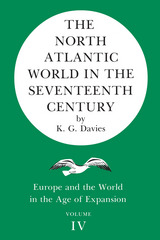 The North Atlantic World in the Seventeenth Century was first published in 1974. Minnesota Archive Editions uses digital technology to make long-unavailable books once again accessible, and are published unaltered from the original University of Minnesota Press editions.

In his preface the author writes: "Europe's style was both courageous and ignoble, Europe's achievement both magnificent and appalling. There is less need now that Europe's hegemony is over, for pride or shame to color historical judgments." In that candid vein Mr. Davies provides a balanced and impartial history of British, French, and Dutch beginnings in North America, the Caribbean, and West Africa to the end of the seventeenth century. He contrasts two styles of empire: the planting of trading posts in order to gather fur, fish, and slaves; and the planting of people in colonies of settlement to grow tobacco and sugar. He shows that the first style, involving little outlay of capital, was favored by European merchants; the second, by rulers and landlords. In his conclusion he examines the impact made by the Europeans on the people they traded with and expropriated, and assesses the diplomatic, economic, and cultural repercussions of the North Atlantic on Europe itself.

"Should provide valuable supplementary reading in courses in British imperial and American colonial history, as well as a source of information for those who teach them." –History.

AUTHOR BIOGRAPHY
KG Davies was from Bristol England, and was the author or editor of a number of historical works and was also a professor of history at the University of Bristol.