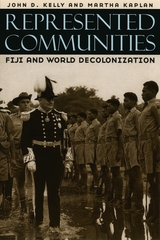 In 1983 Benedict Anderson's Imagined Communities revolutionized the anthropology of nationalism. Anderson argued that "print capitalism" fostered nations as imagined communities in a modular form that became the culture of modernity.

Now, in Represented Communities, John D. Kelly and Martha Kaplan offer an extensive and devastating critique of Anderson's depictions of colonial history, his comparative method, and his political anthropology. The authors build a forceful argument around events in Fiji from World War II to the 2000 coups, showing how focus on "imagined communities" underestimates colonial history and obscures the struggle over legal rights and political representation in postcolonial nation-states. They show that the "self-determining" nation-state actually emerged with the postwar construction of the United Nations, fundamentally changing the politics of representation.

Sophisticated and impassioned, this book will further anthropology's contribution to the understanding of contemporary nationalisms.
AUTHOR BIOGRAPHY
John D. Kelly is an associate professor of anthropology at the University of Chicago and the author of A Politics of Virtue: Hinduism, Sexuality, and Countercolonial Discourse in Fiji.

Martha Kaplan is an associate professor of anthropology at Vassar College and the author of Neither Cargo nor Cult: Ritual Politics and the Colonial Imagination in Fiji.
TABLE OF CONTENTS


Preface
Acknowledgments
1. Nation and Decolonization
On the Actual Origins of Nation-States
2. Time and the Global
Against the Homogeneous, Empty Communities in Contemporary Social Theory
3. Diaspora and World War, Blood and Nation in Fiji and Hawai'i
4. "They Cannot Represent Themselves"
Colonial Communities in Fiji, 1936 to 1947
5. "Blood on the Grass and Dogs Will Speak"
Ritual Politics and the Nation in Independent Fiji
6. Constituting Fiji
Communities, the Nation-State, and the Coup of 2000
Notes
Bibliography
Index