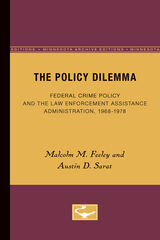 The Policy Dilemma: Federal Crime Policy and the Law Enforcement Assistance Administration, 1968-1978
by Malcolm Feeley and Austin Sarat
University of Minnesota Press, 1981
Paper: 978-0-8166-0904-8
The Policy Dilemma was first published in 1981.What can and should the federal government do to solve complex social problems? Malcolm M. Feeley and Austin D. Sarat address this question in the context of one important issue, the problem of crime. They examine a major federal program, the Law Enforcement Assistance Administration, and show how its operation is shaped and reflects what they call the “policy dilemma.” In response to the public’s demands, the government tries to do too much and promises more than it can deliver. While The Policy Dilemma is first of all a study of the federal government’s attempts to reform and improve criminal justice, it also examines broader issues of public policy making. The problems faced by the LEAA in crime control are shared by all governmental attempts to attack large, insufficiently defined social problems.The authors base their conclusions on extensive interviews with federal, state, and local officials responsible for implementing the Safe Streets Act, including members of ten state planning agencies. In conclusion, Feeley and Sarat summarize the problems of the Safe Streets Act and review congressional attempts at revision and reorganization. They argue that those attempts will only prolong the policy dilemma. The failure of the LEAA, they suggest, is not just a failure of administration but of concept and political theory.