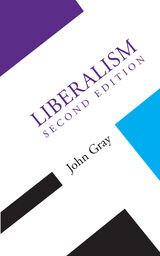 Since the publication in 1986 of the first edition of Liberalism, both the world and the author’s views have changed significantly. In this new edition, John Gray argues that whereas liberalism was the political theory of modernity, it is ill-equipped to cope with the dilemmas of the postmodern condition. The task now, as Gray sees it, is to develop a pluralist theory, in which the liberal problem of finding a modus vivendi among rival communities and worldviews is solved in postliberal terms.