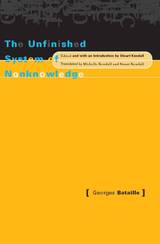 A deft reconstruction of what Georges Bataille envisioned as a continuation of his work La Somme Athéologique, this volume brings together the writings of one of the foremost French thinkers of the twentieth century on the central topic of his oeuvre. Gathering Bataille’s most intimate writings, these essays, aphorisms, notes, and lectures on nonknowledge, sovereignty, and sacrifice clarify and extend Bataille’s radical theology, his philosophy of history, and his ecstatic method of meditation. Following Bataille’s lead, as laid out in his notebooks, editor Stuart Kendall assembles the fragments that Bataille anticipated collecting for his summa. Kendall’s introduction offers a clear picture of the author’s overall project, its historical and biographical context, and the place of these works within it. The "system" that emerges from these articles, notes, and lectures is "atheology," understood as a study of the effects of nonknowledge. At the other side of realism, Bataille’s writing in La Somme pushes language to its silent end. And yet, writing toward the ruin of language, in search of words that slip from their meanings, Bataille uses language—and the discourses of theology, philosophy, and literature—against itself to return us to ourselves, endlessly. The system against systems is in fact systematic, using systems and depending on discourses to achieve its own ends—the end of systematic thought.A medievalist librarian by training, Georges Bataille (1897–1962) was active in the French intellectual scene from the 1920s through the 1950s. He founded the journal Critique and was a member of the Acéphale group and the Collège de Sociologie. Among his works available in English are Visions of Excess (Minnesota, 1985), Tears of Eros (1989), and Erotism (1990).