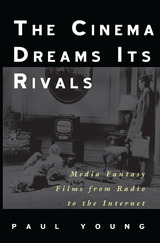 By the middle of the twentieth century, Hollywood, formerly the one and only dream factory, found itself facing a host of media rivals for the public’s attention. In the 1980s, another competitor arrived in the form of the proto-Internet—a computer network as yet untested by all but research scientists, college students, the military, and a few thousand PC and modem owners. How did Hollywood respond to this nascent challenge? By dreaming about it, in a series of technological fantasies, from Tron to War Games to Lawnmower Man. The Cinema Dreams Its Rivals examines the meaning and effect of the movies’ attempts to reshape the shifting media landscape.

Paul Young looks at the American cinema’s imaginative constructions of three electronic media—radio, television, and the Internet—at the times when these media seemed to hold limitless possibilities. In doing so, he demonstrates that Hollywood is indelibly marked by the advent of each new medium, from the inclusion of sound in motion pictures to the use of digital graphics. But conversely, Young argues, the identities of the new media are themselves changed as Hollywood turns them to its own purposes and its own dreams.

Paul Young is professor of English and director of the film studies program at Vanderbilt University.
TABLE OF CONTENTS


Contents
Introduction: The Perpetual Reinvention of Film
1. Rubes, Camera Fiends, Filmmakers, and Other Amateurs: The Intermedia Imagination of Early Films
2. A Cinema Without Wires
3. Eating the Other Medium: Sound Film in the Age of Broadcasting
4. The Glass Web: Unraveling the Videophobia of Postwar Hollywood Cinema
5. The Negative Reinvention of Cinema: Late Hollywood in the Early Digital Age
Acknowledgments
Notes
Filmography
Index