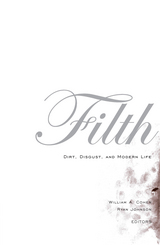 From floating barges of urban refuse to dung-encrusted works of art, from toxic landfills to dirty movies, filth has become a major presence and a point of volatile contention in modern life. This book explores the question of what filth has to do with culture: what critical role the lost, the rejected, the abject, and the dirty play in social management and identity formation. It suggests the ongoing power of culturally mandated categories of exclusion and repression.Focusing on filth in literary and cultural materials from London, Paris, and their colonial outposts in the nineteenth and early twentieth centuries, the essays in Filth, all but one previously unpublished, range over topics as diverse as the building of sewers in nineteenth-century European metropolises, the link between interior design and bourgeois sanitary phobias, fictional representations of laboring women and foreigners as polluting, and relations among disease, disorder, and sexual-racial disharmony. Filth provides the first sustained consideration, both theoretical and historical, of a subject whose power to horrify, fascinate, and repel is as old as civilization itself.Contributors: David S. Barnes, U of Pennsylvania; Neil Blackadder, Knox College; Joseph Bristow, U of California, Los Angeles; Joseph W. Childers, U of California, Riverside; Eileen Cleere, Southwestern U; Natalka Freeland, U of California, Irvine; Pamela K. Gilbert, U of Florida; Christopher Hamlin, U of Notre Dame; William Kupinse, U of Puget Sound; Benjamin Lazier, U of Chicago; David L. Pike, American U; David Trotter, U of Cambridge.William A. Cohen is associate professor of English at the University of Maryland and the author of Sex Scandal: The Private Parts of Victorian Fiction.Ryan Johnson is completing his Ph.D. in the Department of English at Stanford University, where he has served as general editor of the Stanford Humanities Review.
TABLE OF CONTENTS