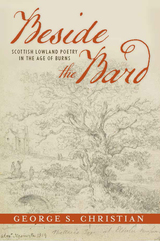 Beside the Bard argues that Scottish poetry in the age of Burns reclaims not a single past, dominated and overwritten by the unitary national language of an elite ruling class, but a past that conceptualizes the Scottish nation in terms of local self-identification, linguistic multiplicity, cultural and religious difference, and transnational political and cultural affiliations. This fluid conception of the nation may accommodate a post-Union British self-identification, but it also recognizes the instrumental and historically contingent nature of “Britishness.” Whether male or female, loyalist or radical, literati or autodidacts, poets such as Alexander Wilson, Carolina Olyphant, Robert Tannahill, and John Lapraik, among others, adamantly refuse to imagine a single nation, British or otherwise, instead preferring an open, polyvocal field, on which they can stage new national and personal formations and fight new revolutions. In this sense, “Scotland” is a revolutionary category, always subject to creative destruction and reformation.

Published by Bucknell University Press. Distributed worldwide by Rutgers University Press.
AUTHOR BIOGRAPHY
GEORGE S. CHRISTIAN teaches British and world literature at the University of Texas at Austin. He holds a law degree and doctorates in English and history from the University of Texas and practices law in Austin. He has published articles in Nineteenth-Century Studies, The Hardy Review, Dickens Studies Annual, LIT: Literature Interpretation, Theory, European Romantic Review, and other scholarly journals. He and his wife, Betsy Christian, have also authored two books on Texas history for children and young adults.

REVIEWS
"Covering the works of Scottish poets from the late eighteenth and early nineteenth centuries, George S. Christian’s Beside the Bard: Scottish Lowland Poetry in the Age of Burns offers a detailed and nuanced review of this important but neglected body of writing, assessing the distinctive contributions of many Scottish poets forced to write 'in the shadow of Burns.' Beside the Bard is a welcome addition to the study of Scottish verse and Robert Burns, for it allows us to hear the unique voices of Lowland Scottish poets and appreciate the long-hidden value of their work."
— Corey E. Andrews, author of The Genius of Scotland: The Cultural Production of Robert Burns, 1785-1834

"By examining a group of less well-known poets, this book will interest a constituency of scholars in Scottish studies, and there are stretches where it is impossible not to be impressed with the author's erudition."
— Burns Chronicle