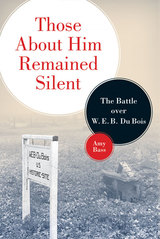 On the eve of Martin Luther King Jr.’s 1963 March on Washington, W. E. B. Du Bois died in exile in Ghana at the age of 95, more than a half century after cofounding the NAACP. Five years after his death, residents of Great Barrington, the small Massachusetts town where Du Bois was born in 1868, proposed recognizing his legacy through the creation of a memorial park on the site of his childhood home. Supported by the local newspaper and prominent national figures including Harry Belafonte and Sydney Poitier, the effort to honor Du Bois set off an acrimonious debate that bitterly divided the town. Led by the local chapter of the Veterans of Foreign Wars, opponents compared Du Bois to Hitler, vilifying him as an anti-American traitor for his communist sympathies, his critique of American race relations, and his pan-Africanist worldview.

In Those About Him Remained Silent, Amy Bass provides the first detailed account of the battle over Du Bois and his legacy, as well as a history of Du Bois’s early life in Massachusetts. Bass locates the roots of the hostility to memorialize Du Bois in a cold war worldview that reduced complicated politics to a vehement hatred of both communism and, more broadly, anti-Americanism. The town’s reaction was intensified, she argues, by the racism encoded within cold war patriotism.

Showing the potency of prevailing, often hidden, biases, Those About Him Remained Silent is an unexpected history of how racism, patriotism, and global politics played out in a New England community divided on how—or even if—to honor the memory of its greatest citizen.

Amy Bass is professor of history at The College of New Rochelle. She is author of Not the Triumph but the Struggle: The 1968 Olympics and the Making of the Black Athlete (Minnesota, 2002).


Introduction: The Shadow of the Veil


1. Du Bois in Great Barrington and Beyond


2. Evolution of a Progressive Mind


3. Her Proudest Contribution to History


4. Where Willie Lived and Played


5. A Prophet without Honor