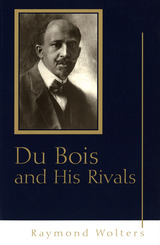 W. E. B. Du Bois was the preeminent black scholar of his era. He was also a principal founder and for twenty-eight years an executive officer of the nation’s most effective civil rights organization, the National Association for the Advancement of Colored People (NAACP). Even though Du Bois was best known for his lifelong stance against racial oppression, he represented much more. He condemned the racism of the white world but also criticized African Americans for mistakes of their own. He opposed segregation but had reservations about integration. Today he would be known as a pluralist.
In Du Bois and His Rivals, Raymond Wolters provides a distinctive biography of this great pioneer of the American civil rights movement. Readers are able to follow the outline of Du Bois’s life, but the book’s main emphasis is on discrete scenes in his life, especially the controversies that pitted Du Bois against his principal black rivals. He challenged Booker T. Washington because he could not abide Washington’s conciliatory approach toward powerful whites. At the same time, Du Bois’s pluralism led him to oppose the leading separatists and integrationists of his day. He berated Marcus Garvey for giving up on America and urging blacks to pursue a separate destiny. He also rejected Walter White’s insistence that integration was the best way to promote the advancement of black people.
Du Bois felt that American blacks should be full-fledged Americans, with all the rights of other American citizens. However, he believed that they should also preserve and develop enough racial distinctiveness to enable them to maintain and foster a sense of racial identity, community, and pride. Du Bois and His Rivals shows that Du Bois stood for much more than protest against racial oppression. He was also committed to pluralism, and his pluralism emphasized the importance of traditional standards and of internal cooperation within the black community. Anyone interested in the civil rights movement, black history, or the history of the United States during the early twentieth century will find this book valuable.
AUTHOR BIOGRAPHY
Raymond Wolters is Thomas Muncy Keith Professor of History at the University of Delaware in Newark. He is the author of numerous books, including The New Negro on Campus: Black College Rebellions of the 1920s and The Burden of Brown: Thirty Years of School Desegregation.
TABLE OF CONTENTS