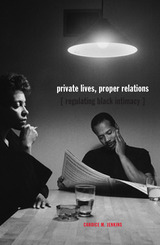 Private Lives, Proper Relations begins with the question of why contemporary African American literature—particularly that produced by black women—is continually concerned with issues of respectability and propriety. Candice M. Jenkins argues that this preoccupation has its origins in recurrent ideologies about African American sexuality, and that it expresses a fundamental aspect of the racial self—an often unarticulated link between the intimate and the political in black culture.

In a counterpoint to her paradigmatic reading of Nella Larsen’s Passing, Jenkins’s analysis of black women’s narratives—including Ann Petry’s The Street, Toni Morrison’s Sula and Paradise, Alice Walker’s The Color Purple, and Gayl Jones’s Eva’s Man—offers a theory of black subjectivity. Here Jenkins describes middle-class attempts to rescue the black community from accusations of sexual and domestic deviance by embracing bourgeois respectability, and asserts that behind those efforts there is the “doubled vulnerability” of the black intimate subject. Rather than reflecting a DuBoisian tension between race and nation, to Jenkins this vulnerability signifies for the African American an opposition between two poles of potential exposure: racial scrutiny and the proximity of human intimacy.

Scholars of African American culture acknowledge that intimacy and sexuality are taboo subjects among African Americans precisely because black intimate character has been pathologized. Private Lives, Proper Relations is a powerful contribution to the crucial effort to end the distortion still surrounding black intimacy in the United States.