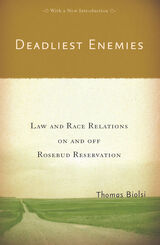 Deadliest Enemies: Law and Race Relations on and off Rosebud Reservation
by Thomas Biolsi
University of Minnesota Press, 2007
Paper: 978-0-8166-4971-6

In Deadliest Enemies, Biolsi connects the origins of racial tension between Indians and non-Indians on the Rosebud Reservation in South Dakota to federal laws, showing how the courts have created opposing political interests along race lines. Biolsi demonstrates that the court’s definitions of legal rights—both constitutional and treaty rights—make solutions to racial tensions intractable.

This powerful work sheds much-needed light on racial conflicts in South Dakota and in the rest of the United States, and holds white people accountable for the benefits of their racial privilege that come at the expense of Native Americans.

Thomas Biolsi is professor of Native American studies at the University of California at Berkeley.