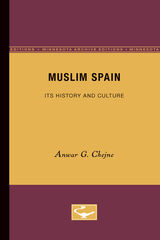 This comprehensive history of Muslim Spain in the centuries from 711 to 1492 provides a panoramic view of the whole field of Hispano-Arabic culture, including science, philosophy, and the arts. As the account makes clear, Muslim Spain was always an integral part of the main literary and intellectual stream of the East and as such was as Islamic as Syria or Egypt. Thus the history is important for an understanding of Islamic culture as a whole and of the interaction of people and ideas. The author shows that the interdependence and continuity of Muslim culture through its long history was nurtured by the unhampered travel of students and scholars and the circulation of publications throughout the width and breadth of the Islamic Empire, notwithstanding the political division that separated Muslim Spain from the center of Islam.

The first five chapter of the book describe, dynasty by dynasty, the Muslims' conquest and rule. The remaining chapters discuss in detail all aspects of Hispano-Arabic culture. Among the subjects are the social structure, the sciences and education, Arabic and linguistic studies, prose and belles lettres, poetry, history, geography, and travel, courtly love, religion, philosophy and mysticism, the natural sciences, and architecture, the minor arts, and music.

The book is illustrated with photographs, drawings, and maps, and there is an extensive bibliography.