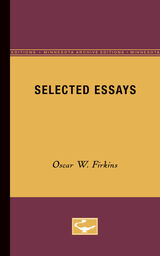 Professor Firkins' reputation as a writer whose work combines the qualities of thought and style, of penetrating criticism and epigrammatic wit, is amply upheld by these seventeen essays.

The volume opens with "Man: A Character Sketch," which Christopher Morley has described as a "brilliant essay in spiritual anthropology." Emerson and Howells, on both of whom Mr. Firkins was a recognized authority, are each the subject of an essay. Glimpses of the author's boyhood and of his remarkable mother are given in "Undepicted America," which is the development of an original theory concerning American letters. In "The Irresponsible Power of Realism" the author flays some modern tendencies in literature and in "The Sermon on the Mount" he sets forth the basic principles of his humanistic religious views.

A few of these essays are here published for the first time. Most of them, however, have been selected as representative of Mr. Firkins' best published work in the field of the critical essay.