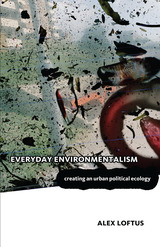 Everyday Environmentalism develops a conversation between marxist theories of everyday life and recent work in urban political ecology, arguing for a philosophy of praxis in relation to the politics of urban environments. Grounding its theoretical debate in empirical studies of struggles to obtain water in the informal settlements of Durban, South Africa, as well as in the creative acts of insurgent art activists in London, Alex Loftus builds on the work of key marxist thinkers to redefine “environmental politics.”

A marxist philosophy of praxis—that world-changing ideas emerge from the acts of everyday people—undergirds the book. Our daily reality, writes Loftus, is woven out of the entanglements of social and natural relations, and as such a kind of environmental politics is automatically incorporated into our lives. Nevertheless, one effect of the public recognition of global environmental change, asserts Loftus, has been a resurgence of dualistic understandings of the world: for example, that nature is inflicting revenge on arrogant human societies.

This ambitious work reformulates—with the assistance of such philosophers as Lukács, Gramsci, Lefebvre, and others—a politics of the environment in which everyday subjectivity is at the heart of a revolutionary politics.

Alex Loftus is a lecturer in geography at Royal Holloway, University of London.

1. The Urbanization of Nature: Neil Smith and Posthumanist Controversies
2. Sensuous Socio-Natures: The Concept of Nature in Marx
3. Cyborg Consciousness: Questioning the Dialectics of Nature in Lukács
4. When Theory Becomes a Material Force: Gramsci’s Conjunctural Natures
5. Cultural Praxis as the Production of Nature: Lefebvrean Natures
Conclusion: The Nature of Everyday Life