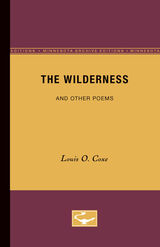 BUY
The Wilderness and Other Poems
by Louis Coxe
University of Minnesota Press, 1958
Paper: 978-0-8166-6850-2
The Wilderness and Other Poems was first published in 1958.This collection, Mr. Coxe’s third published volume of poetry, includes the long narrative poem “The Wilderness” and thirty-four shorter lyric poems. Of this book, Morton Dauwen Zabel writes: “The Wilderness is a collection of series and thoughtful poems, scrupulously conceived and phrased, many of them notable for personal charm and feeling as well, and for combining a keenly responsible intelligence with genuine lyric and reflective emotion.”Each of the poems dramatizes a single experience or complex of feelings about certain fairly common experiences. In many of the poems there is a prevailing theme of the tension between the opposite poles of will and fate. A few of the more ambitious poems attempt to answer the question, How is a man to live today?Since Mr. Coxe believes that a poem should sound well, these are poems for the ear as well as for the eye.The long title poem is published here for the first time. Some of the shorter poems have appeared in such magazines as the New Yorker, the Nation, the New Republic, Poetry, and the Sewanee Review.Earlier volumes of Mr. Coxe’s poetry are The Second Man and Other Poems (University of Minnesota Press) and The Sea Faring and Other Poems. He is also the co-author, with Robert Chapman, of Billy Budd: A Play.