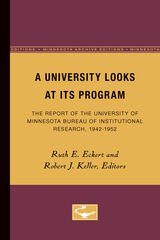 BUY
A University Looks at its Program: The Report of the University of Minnesota Bureau of Institutional Research, 1942-1952
edited by Ruth Eckert and Robert Keller
University of Minnesota Press, 1954
Paper: 978-0-8166-6854-0
A University Looks at its Program was first published in 1954.Educational research, which first demonstrated its value in the fields of primary and secondary teaching, has been extended in comparatively recent times to the college and university level. The University of Minnesota has been a pioneer in the development of research methods to investigate problems of higher education. Its program of self-study was inaugurated in the early 1920’s under the far-seeing administration of the late Lotus D. Coffman.The 23 studies presented here are illustrative of the educational research conducted under the Minnesota plan during the decade of 1942 to 1952. They are a representative selection from a much larger number of studies sponsored during that period by the University’s Committee on Educational Research (now designated as the Committee on Institutional Research). The problems investigated are of four major types: those of a general character, such as enrollment trends or curriculum developments; those related to the undergraduate programs; those associated with specialized and graduate programs; and those connected with staff activities. The Minnesota self-study plan has been flexible and broad; no question has been considered too small to probe if its answer seemed likely to help some staff member or student group, and no proposal has been ruled out as over-ambitious if the information sought would help to build a sound program.These reports will be useful to college and university administrators, faculties, and research specialists for the clear picture they give of the scope and methods of a research program designed to help an educational institution in its long-term planning.